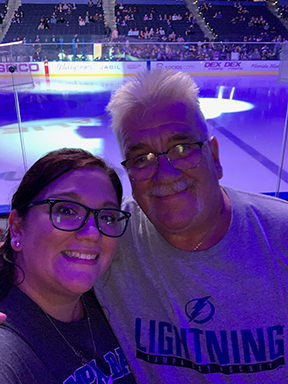 For 25 years Billy Triglia, Empath Health durable medical equipment (DME) driver, has served patients by bringing the essential supplies they need directly to their door. From wheelchairs to oxygen, he ensures patients have what they need when they need it and answers any questions they may have along the way.

“I consider myself an employee of every patient I deliver to,” says Triglia. “I’m here to make their life easier.”

His compassion and generosity over the years has not gone unnoticed. When Triglia’s daughter, Kristen, learned about the Tampa Bay Lightning’s “Bring the Thunder” promotion, she knew her dad was a perfect candidate. This campaign offers community members the opportunity to nominate a deserving hockey fan who has never been to a Lightning game to receive a VIP experience. She wrote a letter about his dedication to Empath Health in hopes his story would move others. Because of his generous heart inspiring hers, they were able to spend quality father-daughter time at a recent home game.

At the game they were treated to highly coveted seats behind the Lightning bench. Triglia also received swag and a shoutout on the jumbotron during the game. The night was topped off with an exciting overtime shoot-out win for the home team.  It was a celebration fitting of a celebrated employee.

Though he is a steadfast colleague now, Triglia’s time with Empath Health almost didn’t happen. After moving to Florida, he was working multiple jobs while seeking more regular employment. A frequent patron of one location encouraged Triglia to apply for a position with what was then Suncoast Hospice. He was initially resistant to the idea; however, with enough persistence he finally gave in.

“I had never heard of hospice before,” explains Triglia. “I didn’t know what it was and really didn’t want anything to do with it.”

To his surprise, he received a call for an interview about a week and a half after submitting the application. He put that off, too, until a second phone call changed his mind. The hiring manager at the time said it was his last chance to set up an interview. There wouldn’t be a third call. Triglia decided he should take the opportunity.

During the interview he toured the campus and learned more about the organization. The mission struck a chord with him. He accepted the job as soon as it was offered. Now, Triglia is one of Empath Health’s biggest advocates.

“I love every minute of my job. Empath Health helped open my heart and now I get to help people,” he adds. “Seeing patients or family members smile when I bring a delivery makes it all worth it.”

Join our Empath Health team and make a difference!