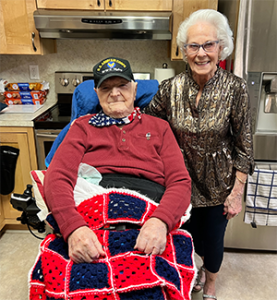 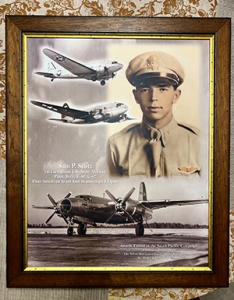 Samuel P. Scott has been in the spotlight a lot lately.

His hometown of Palmetto declared August 21, 2021, Samuel P. Scott Day to mark the occasion of his 100th birthday, and that was followed by a parade featuring fire department vehicles and a birthday party attended by between 40 and 50 friends and family members.

On Dec. 18, 2021, Sam was the guest of honor and laid the first wreath at the Wreaths Across America wreath-laying event at Mansion Memorial Park Cemetery in Ellenton.

It was all to celebrate the life of a decorated World War II pilot who fought for his country, then returned home to enjoy a fruitful life in the town where he was born and raised.

Scott, an Empath Personal Care client, says he appreciates the attention and gratitude, but his memories of what he did in the war and the victory the Allies earned are most important to him.

“I can’t explain the determination I had to help win the war. And I did it, and that’s what counts,” Scott said. “I’m not that proud of medals. I don’t know where they are, or where I keep them. … How do you get them out and get the medals to dance around for you? You don’t.”

Scott was not yet 21 when he enlisted in the Army Air Corps in 1942. On his application, Scott was asked to list the three jobs he wanted in order of preference. He answered “Pilot,” “Pilot,” and “Pilot.” The Air Corps got the hint, deploying Scott to the Pacific Theater with the 5th Combat Cargo Squadron. He flew a C-46 aircraft into combat zones, bringing in equipment and taking out the bodies of soldiers. Scott was shot down once, suffering broken ribs and a back injury.

Late in the war, Scott was responsible for taking down Japanese flags and replacing them with American flags as the Allies occupied Japan. He has one of those Japanese flags in a frame hanging in his home. 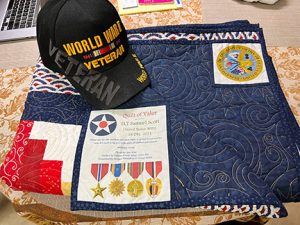 “I fought for the people of this country.”

After the war, Scott returned to Palmetto and became an electrical contractor, working for his father at Scott Electric Company. He retired at age 76.

Scott is now wheelchair bound. He has been a client of Empath Personal Care, formerly Approved Home Health, since 2017. Until about a year ago, Bonnie Scott, Sam’s wife of 61 years, was his primary caregiver, using Empath Personal Care for housekeeping and respite care. But Sam suffered a serious fall, and Bonnie was injured, one day when she was lifting him out of bed.

Now, Jeanniss, an Empath Personal Care home health aide, visits six days per week, helping Sam get out of bed, changing his clothes, bathing and shaving him, and fixing him breakfast. She also helps out with household chores, including vacuuming and mopping behind a family German shepherd who sheds.

“One day,” Bonnie Scott said, “my son comes in and says, ‘Mom, the family has decided we want you to hire a little more help.’ I’ve been very pleased with her. She’s been right on top of everything.”

Empath Personal Care is an Empath Health company. If you or your loved one could benefit from the services Empath Personal Care provides, call (727) 323-4266 (Pinellas County) or (941). 870-8740 (Sarasota, Manatee, Lee, Collier Charlotte, DeSoto counties).