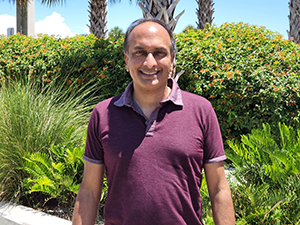 Lifelong learning and community service intersect for Atul Garg. It’s hardly a surprise he found his way to Empath Health and AmeriCorps.

Since college, Garg has spent two years in business school, one year in law school and three years studying spiritual psychology and consciousness, health and healing. His latest educational adventure is the Applied Compassion Training program, a yearlong online training and certification program offered by Stanford University’s Center for Compassion and Altruism Research and Education.

Garg’s community service includes volunteering as a sighted guide and two years as a hospice care center volunteer in Washington, DC. Most recently, during a 2020-21 AmeriCorps service year, he co-mediated community conflicts on Zoom and co-facilitated in-person trainings at the Baltimore Police Department to teach officers about emotional intelligence and how to de-escalate conflicts.

He had no idea that he would one day help launch an AmeriCorps service program. Interested in a change of pace, Garg moved to Florida in August after completing his AmeriCorps service. Drawn to the flexible, part-time hours, he briefly considered applying to AmeriCorps’ Legacy Corps for Veterans and Military Families (LCVMF) program but instead got busy with getting settled into his new life in St. Pete.

The universe had other plans, though. While having lunch outside a local brewery, he struck up a conversation with a stranger seated next to him. That stranger turned out to be Empath’s grants director, and she connected Garg with Empath’s volunteer services director. What started out as a conversation about a part-time AmeriCorps service opportunity turned into a full-time job as Empath’s new Legacy Corps Program Coordinator. He is now recruiting volunteers – AmeriCorps calls them members – for the first cohort of the program, which is funded by an AmeriCorps grant.

“When I look back at everything I’ve done over the last decade, there were things that didn’t make sense to me at the time,” Garg says. “I volunteered in a hospice, I served in AmeriCorps, and then magically this Legacy Corps opportunity gets presented to me. Even though I had just moved and wasn’t looking for a full-time job yet, I decided to trust that I was meant to take on this role, and here I am.”

Legacy Corps service opportunities are open to individuals 18 and older who are available to serve in Pinellas County. The program offers financial rewards for spending a few hours per week with a veteran, giving the veteran’s primary caregiver a much-needed break. The yearlong commitment runs from September 2022 through August 2023. Depending on the number of completed service hours, the financial benefits may include:

“The education award wasn’t important to me when I applied to AmeriCorps,” says Garg, “but, after I completed my service and decided to do the ACT program, I was able to apply my entire full-time award to my Stanford tuition.”

Garg says that college students, those who already volunteer within or outside of a healthcare setting, or military-connected / retired military are likely applicants. He emphasized, though, that an applicant’s ability to comfortably spend time with someone who’s received a hospice diagnosis is more important than their school or work background.

“Legacy Corps supports the caregivers, and our veteran patients and their families are the primary beneficiaries,” Garg added. “Every day, caregivers are challenged on all levels – physically, mentally, emotionally and spiritually. If we do our job well, there’s a greater likelihood that we’ll be able to keep our veterans in their own homes and communities longer so that they can postpone or even avoid having to move to a care center or other facility.”

Garg observed, “Compassion is the thread that runs through all those who volunteer – they perceive or witness some form of suffering, and they feel compelled to take action to help alleviate it. Anyone who feels drawn to giving a caregiver a break and to spending a few hours each week with a veteran has compassion, and I would encourage them to apply.”

To find out more about Empath’s AmeriCorps Legacy Corps program, visit EmpathHealth.org/LegacyCorps. Informational meetings will be held throughout the summer, and the dates, times, and Zoom links can be viewed on the website. To express interest in participating, call (727) 523-3440 or email VolunteerInbox@EmpathHealth.org.