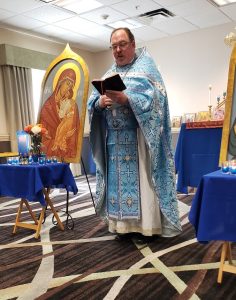 Welcome to Extraordinary Stories of Empath Health. In this space we highlight our fantastic colleagues and the extraordinary work they do to make Empath Health’s Full Life Care a daily reality for the patients and families we serve. Join us as we demonstrate the ways in which our colleagues exemplify Empath’s core values: Eternally Hopeful, Profoundly Helpful, Lovingly Truthful, Confidently Skillful and Courageously Impactful.

Suncoast Hospice RN John Chudik turned to the new nurse who shadowed him for the day and gently prepared her.

“Bear with me,” he said. “We’re going to do something a little bit unusual today.”

Moments earlier, during a hospice admission visit, Chudik noticed the prospective patient’s condition was declining rapidly. The patient’s wife was distraught, saying he had planned to be baptized as a Roman Catholic but had not yet done so. If he wasn’t baptized, she said, the couple could not be buried together in a Catholic cemetery.

Chudik explained to her that he is an ordained Orthodox priest and that his faith’s sacraments are recognized by the Catholic Church. He then excused himself. When he returned, Chudik had morphed from a nurse into Father Chudik. Holy water in tow, he baptized the patient, who passed away just 12 hours later.

The patient’s wife was incredibly grateful.

“How do you deny somebody who presents you with this situation and know what’s happening in front of you?” Chudik said. “I just didn’t feel right leaving them without attending to that. Based on who I am and how I’ve been raised and how I’ve been taught as a priest, it would not sit well with me.”

Chudik later let the new nurse know that what she witnessed would not be part of her responsibilities.

The dual roles are nothing new to Chudik, who has been a priest for 27 years and a nurse for 22. Recently, he transferred within the Empath Health organization to become a clinical manager at Empath Home Health in Marion County, close to a new congregation, Sts. Joachim & Anne Orthodox Church, he is leading in The Villages.

Chudik, a native of Pittsburgh and the father of two adult children, moved to Florida from Chicago in 2000 to head up St. Mark Orthodox Church in Bradenton. He started his medical career as a nurse at Sarasota Memorial Hospital, later switching to home care. He joined Empath Health four-and-a-half years ago.

Though he doesn’t find anything remarkable about his two jobs, Chudik admits his choice of vocations is unique.

“When people think of priests,” he said, “they largely think of Roman Catholic priests and that their churches are so large they don’t have time for anything but church. Our parishes tend to be a little bit smaller, especially in the American Orthodox Church. Many of our priests do have work outside, or in addition to, their parish work. It’s not uncommon to find priests working.”

Chudik became a hospice chaplain while serving his first congregation in Chicago. He wanted to do more to help patients.

“I prayed with people, but then I felt like, ‘But I know medicine, too.’ I didn’t feel like I was doing enough to help their pain,” he said. “I asked my archbishop for permission to go back to school. He gave me a blessing to go back to nursing school so I could try to assuage people’s pain and educate them on various aspects of medicine.”

His nursing experience positively impacts his spiritual work as well. Parishioners who know about his other job are eager to seek medical advice.

“I don’t ever see myself not doing both of these things in one form or another. I find it vital to be able to do both.”

Empath Health is looking for extraordinary people to join our team. Learn more about our current job opportunities.