Forty Years of Survival with HIV 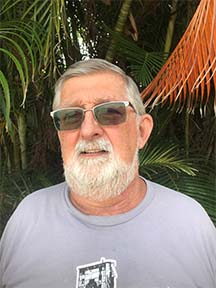 Empath Partners in Care (EPIC) client Michael Tollar has lived with HIV since the 1980s. He has seen HIV and AIDS evolve from a new, perplexing condition to a manageable illness with plenty of treatment options and support.

“After almost 40 years, you know the ropes,” Tollar said.

As AIDS made its way into the spotlight it took a devastating toll. Tollar remembers attending near-weekly memorial services in the early years as AIDS swept through his friend group. Only two of those friends are still alive today.

“Back then it was a death sentence. Most people had about 12 months to live after diagnosis,” says Tollar. “When my partner was diagnosed, all my energy went into keeping him well for as long as possible. We wanted to make the most of the time we had left together.”

At that point, Tollar knew he had the virus but didn’t give it much thought. Access to care for HIV was practically nonexistent, and testing was just starting to become available. Those who joined early clinical trials for medication often experienced intense side effects. He made the decision to wait.

After moving from Atlanta to the Tampa Bay area in the early ‘90s Toller connected with ASAP (AIDS Service Association of Pinellas), one of the organizations that would eventually become Empath Partners in Care (EPIC), a member of Empath Health.

The support he has received since then while working with a dedicated case manager has been invaluable. Tollar explains, “EPIC can help lead you to the services that are available, and you can decide what you want to use from there.”

With continued access to care, Tollar joined trials for new HIV medications as they became available. Even though he developed resistance to many of them, it was still progress toward achieving viral suppression. For years Tollar worked with his case manager to maintain a balance between medication and a variety of supplements. He also had access to assistance with other necessities of daily living.

These days he has better understanding of the ins and outs about living with HIV but takes comfort in knowing EPIC has his back. His case manager still keeps track of his medical care and can arrange for additional wellness services, such as massage therapy, when needed.

Support and well-managed care make it is possible for people living with HIV to live a long and fulfilling life. EPIC also provides testing and prevention education to reduce the number of new infections.

“Things are so much different now. Long-term survivors are dying of what everyone else is. There’s really no reason for a person to become positive; we know how it’s spread,” adds Tollar. “Be careful. Get tested.”

Learn more about how EPIC can help you or a loved one living with HIV maintain a healthy and self-sufficient life through medical care, counseling, support.