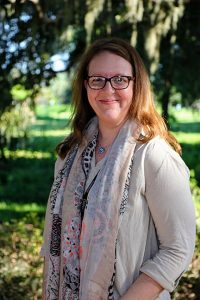 Volunteers David Klain and Louise Gallagher suggested the Alzheimer’s Association create a grief support group to help those who have suffered the loss of someone to Alzheimer’s or other forms of dementia.

Klain noticed that people grieving loved ones who died after long-term declines due to Alzheimers and dementia have different needs than other grieving caregivers.

“It’s an all-consuming process,” Klain said. “The caregiver is so wound up in the care that’s needed, especially toward the end, that they lose themselves. When their person dies, they don’t know who they are.”

Ultimately, the Alzheimer’s Association’s Florida Gulf Coast Chapter decided a grief support group was beyond its mission but recommended Klain and Gallagher take the idea to the Tidewell Hospice Grief Education and Support Center, a program of Empath Health. The Alzheimer’s Association and Empath Health Community Counseling have partnered for similar support groups in Pinellas County.

That was no problem for Klain, who was already a Tidewell Hospice volunteer. Gallagher, his wife, is training to become a Tidewell volunteer.

“I’ve had folks in my support groups over the years that have had this type of loss,” Weber said. “There is always that natural thing in any support group that you compare a long, extended illness to a short illness or to a sudden illness. But I think there is something to the experience of being a caregiver for a long period of time, watching your loved one change in front of you. That is a unique experience, and I think anytime you can get people together who have a common experience it can be very healing.

“For folks who have lost someone to Alzheimer’s or dementia, there’s usually a lot of loss along the way. They’ve often lost their friend circle. They might have been isolated. They might have had their own health struggles that isolated them even more. So when their person finally dies, they’ve lost the community they had before. It is having to find a whole new world, a whole new support system.”

Klain, a retired neonatologist, and Gallagher, a retired psychotherapist, will facilitate the Alzheimer’s and Related Dementias Support Group along with Weber. The six-week virtual group will meet from 1:00-3:00 pm Thursdays beginning September 29.

Alzheimer’s disease and dementia are common in Florida, which ranks behind only California in the number of total cases. In 2020, an estimated 580,000 Floridians 65 and older were living with Alzheimer’s alone. That number is projected to be 720,000 by 2025, according to the Alzheimer’s Association.

The Alzheimer’s and Related Dementias Support Group will discuss the grief process for that specific type of loss and focus on developing coping skills.

“It feels like a very lonely journey sometimes. There are people that just get stuck, and how do we help them so they can move forward in their life.” Gallagher said. “David envisioned calling this group New Horizons because that’s what we’re hoping to do for people, to help them create a new horizon for themselves. That’s not to diminish the loss and grief. That always needs to be acknowledged. But to be able to transcend and pick up their life and move forward probably in a very different way. It can be a very overwhelming transition for a lot of people.”