Strolling in Support of Hospice Care 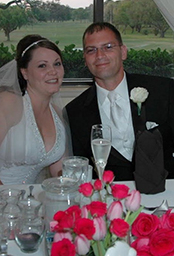 After Brandy Penta’s Grandma Nella Mae died, her family gathered from around the state on Clearwater Beach to walk in her honor at the 2013 Suncoast Hospice Beach Stroll. Eight years later Brandy is gathering a team of friends and family to walk once again on the same beach in support of hospice care. This time, it is in honor of her late husband Brian.

Brian and Brandy’s special place was the beach. They would often go there to talk about their life together. “Sunsets and beaches were our thing,” she said. So it’s fitting that Brandy wants to honor him at the 2021 Suncoast Hospice Beach Stroll on June 5 which is also 10 months to the day since his death.

While Brian and Nella Mae were not under the care of Suncoast Hospice, both Nella Mae and Brian and those helping care for them, benefitted from hospice care from other providers. “When Brian was in his final days we called and they came. He didn’t suffer and they helped me,” said Brandy. 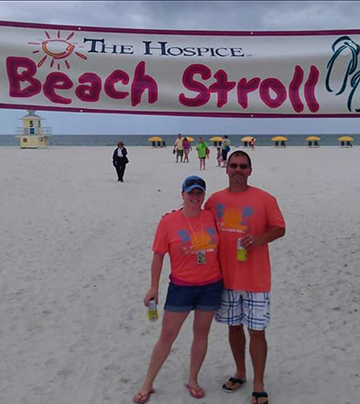 Brandy and Brian at the 2013 Suncoast Hospice Beach Stroll.

“Brian’s Bad-Ass Crew” is raising money and awareness of the need for and the benefits of hospice and palliative care. The team includes another widow and Brandy’s daughter. Brandy said, “I want to give back and raise awareness of what hospice care is and what it does. You know at some point most people will need this kind of care.” And as to why she chooses to come back and support this event she said she “enjoys that people come together to share their stories, to comfort each other. It’s a good thing for me.”

She also wants to shout it from the rooftops, “we were young when cancer took him and it can happen to anyone.”

There is still time to register for the Suncoast Hospice Beach Stroll. You can walk as a team or as an individual. Anyone can come and walk at no charge but donations are encouraged. Learn more at SuncoastHospiceBeachStroll.org.