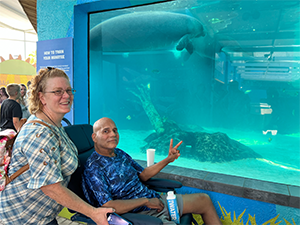 It was as if the sea creatures at Mote Marine Laboratory and Aquarium knew Francisco Colon Jr. and Tanya Silva were coming.

Hugh and Buffett, the Mote’s resident manatees, ambled to the front of their tank to munch on kale and lettuce and swoop down for pictures. Two otters awoke from an afternoon nap to frolic in the water. A huge sea turtle flapped its flippers in an elegant maneuver from the bank of the tank to the front.

It was just the type of day Tanya, Francisco’s partner of six years, envisioned when the Tidewell Hospice social worker, Jennifer, explained the Tidewell Wishes Fund, which fulfills end-of-life wishes for patients and their loved ones.

So Tanya picked the Mote for Francisco’s Tidewell Wish. “I figured since he likes sea life, and so do I, it would be a nice day,” Tanya said.

Neither Francisco nor Tanya, a Venice native, had ever been to Mote.

Francisco, 64, was admitted to Tidewell Hospice, a member of Empath Health, a week earlier. His lymphoma is advancing rapidly. He also experiences the effects of a stroke he suffered four years ago.

“He tells me ‘Don’t cry.’ Today’s a good day,” said Tanya, who met Francisco when both worked as caregivers at a healthcare facility.

Francisco was alert. He was able to communicate in short phrases and gestured at the animals he liked most. A native of the Bronx, N.Y, Francisco moved to Florida about 18 years ago to live in the sunshine. He loved deep-sea fishing. Francisco enjoyed seeing fish he used to catch, particularly tarpon and grouper.