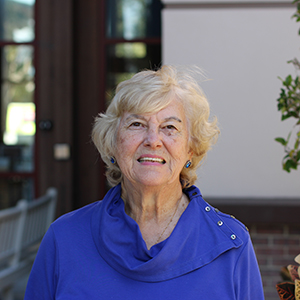 Over the past 12 years Marian Alton has volunteered an average of 165 hours per year in support of the Orange Team for Suncoast Hospice, a member of Empath Health. She started in Patient and Family Support roles and has since expanded her involvement into the sewing group and supporting the office staff and bereavement team.

Like many other volunteers, Alton found her way to Empath Health through the care of a loved one.

“I was introduced to Suncoast Hospice when my husband died,” says Alton, who felt that a “new life” dedicated to volunteerism was in order. “I’ve been here as a volunteer ever since.”

In Patient and Family Support roles, Alton has assisted patients by taking them to appointments or shopping, provided respite for caregivers and more. In the last few years, she has been working on large data input projects in the office, including spending months verifying and updating a database of community resources.

“Marian has never turned down an opportunity to increase her support of the patients and families we serve or to assist the team in any way that she can,” says Volunteer Coordinator Dawn Bostick, who nominated Alton. “Her volunteer commitment is not limited to a set schedule. It extends into staying as long as she is needed to complete a project in the office and to nights and weekends as Marian sews special projects needed for our patients, families and volunteer supports.”

Alton has sewn hundreds of facemasks, activity bibs/aprons for memory loss disorder patients and has even created special quits for the Orange Team and the Suncoast Hospice liaison group. She has also collaborated with a primary care nurse to craft soft leg sleeves for wheelchair-bound patients prone to skin tears. Her most recent project has been creating memory bears. These bears are created out of a piece of clothing that is special to the patient and then presented to the family to serve as a lasting memory of their loved one.

In addition to her work with Suncoast Hospice, Alton is involved in numerous volunteer activities with a variety of organizations across St. Petersburg. She has been an inspiration to friends and family, including her children who are following her path of volunteerism. In recognition of dedication to community service, Alton was selected as a City of St. Petersburg Senior Hall of Fame Volunteer awardee and received a ceremonial key to the city.

“Volunteering is my life,” adds Alton. “I’ve been with Suncoast Hospice for well over 10 years because I enjoy the people. Every project I create makes me feel better.” 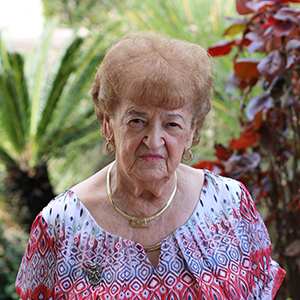 Millie Gilmann has been volunteering at the Suncoast Hospice Resale Shop for more than 25 years and has donated more than 9,000 hours. In that time she has helped new store locations open and become a driving force behind her fellow volunteers.

“Millie helps keep the entire store running smoothly,” says Paul Trackewicz, Resale Shop manager, who nominated Gilmann. “She is a motivator to the team. She rallies the team to take an afternoon break to keep them motivated throughout their shift and builds a sense of community with them as well.”

Gilmann is always willing to assist the store in any capacity. She remained dedicated to her twice weekly shifts during the pandemic and even rallied her fellow volunteers to return to the store.

At the start, Gilmann spent her shifts processing the donated merchandise, which included inspecting the items and getting them ready for the sales floor. Eventually, she took over the sales floor as her responsibility. Gilmann would clean, sort, size and straighten all areas of the store, including the fitting rooms.

In addition to her normal duties, Gilmann accepted the added responsibility of becoming a keyholder. This means she is able to open and close the store when needed and can act as additional leadership when working her shift. Gilmann will also assist sales reconciliation and preparing the registers for the next day during closing shift.

Gilmann has a pleasant and positive attitude in all that she does. Her fellow volunteers look to her for guidance on pricing clothing and maintaining the sales floor. She trains new volunteers to high standards to ensure the continued success of the resale shop. 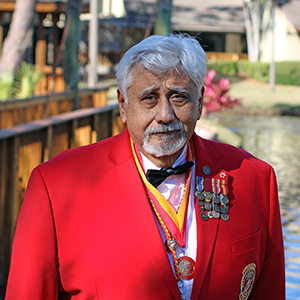 Honor, courage and commitment are the core values of the U.S. Marine Corps. As a Vietnam veteran, Rudy Fontane strives to follow these values every day of his life.

He began volunteering with Empath Health nine years ago after learning about Suncoast Hospice, a member of Empath Health, through the Marine Corps League. Since then, he has donated well over 700 hours across nearly every facet of the organization.

Fontane has brought groceries to Suncoast PACE participants, delivered Thanksgiving food baskets and Christmas gifts to families of the pediatric program and provided generous companionship to patients. He is bilingual and has provided translation assistance to staff when appropriate. The mainstay of his service, however, extends to fellow veterans through the We Honor Veterans program.

“It’s very rewarding to volunteer with veterans,” says Fontane. “I’ve built friendships and it gives me a sense of fulfillment.”

Fontane has helped ensure Empath Health patients were able to participate in Honor Flight. He serves as a liaison to the Marine Corps League keeping members informed of opportunities to get involved and support the Empath Honors program. When there is need for an Honor Guard, Fontane helps recruit fellow members. He even organized a special ceremony at the Suncoast PACE Adult Day Center to ensure participants were honored for their military service. Fontane is also a seasoned interviewer for the Veterans History Project, which records the military stories of veterans to be stored in the Library of Congress.

A key part of Fontane’s service is his involvement with veteran pinning ceremonies. These ceremonies, whether public or at a patient’s bedside, are special moments during which veterans are presented with a lapel pin and certificate in honor of their service. Fontane has been an important part of conducting one-on-one pinnings at the Suncoast Hospice Care Center and has even met patients at their home. He helped organize the first pinning ceremony dedicated to Vietnam veterans, including securing a sponsor to provide lunch for the attending veterans.

When COVID-19 put restrictions on in-person activities, Fontane continued to help organize special recognition activities for veterans, including a parade of first responder and government facility trucks that ended with a pinning ceremony in a patient’s front yard surrounded by staff, volunteers and family with congratulatory signs.

“Rudy is so quiet with his acts of compassion that many of them go unnoticed. In his mind though, he is simply following the values of the U.S. Marine Corps,” says Volunteer Coordinator Traci Sutton, who nominated Fontane. “He is a man of honor who moves quietly through his community doing good works for others without most people knowing the amount of good he does.”

In recognition of Fontane’s dedication to veterans and their needs, he was awarded The Chapel of Four Chaplain Legion of Honor Award in 2015 and was elected Marine Corps League District Vice Commandant 7DOF MCL.