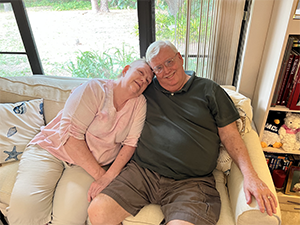 Ruth Anderson always told friends and loved ones she knew how her life would end. There was never a doubt in her mind she would succumb to takotsubo cardiomyopathy, also known as broken heart syndrome, which would happen to her moments after her husband, Sam, died. The thought brought Ruth peace as she knew they would be together.

What was the point of living without Sam, the man she lovingly calls her English bulldog?

That was before Ruth, 67, was diagnosed with a Glioblastoma (brain tumor) and endured surgery, 33 radiation treatments and 36 chemotherapy treatments. The burden of how treatment made her feel took the joy out of her life. After collaborating with her oncologist, doctors and her family, Ruth made the brave decision to seek the support of Tidewell Hospice care.

Ruth and Sam had the goal to celebrate their 30th anniversary, 2 months after starting a hospice plan of care. Their recommitment ceremony was attended by about 40 guests on Dec. 18 with the Tidewell Chaplain David Browning praying over Ruth and Sam’s vows. The celebration was at the home of one of many former nursing students, Andrea Keusch, who is also a Tidewell employee. The Andersons asked their guests to donate to the Tidewell Foundation in lieu of gifts at the recommitment ceremony.

Like Andrea, whom Ruth considers a daughter, there are many Registered Nurses in the Manatee and Sarasota counties, along with Tidewell Hospice clinicians, who remain close to her. Ruth served many years as a nursing professor at State College of Florida and earned her Doctor of Nursing in 2005.

Ruth and Sam met at the appropriately named Honky Tonk Bar in Miami. He noticed Ruth line-dancing. “He said, ‘Save me a dance.’ I said, ‘As many as you want.’ We have been dancing together for 30 years,” Ruth said. “I have never doubted his love. I have trusted him completely. We are a perfect match.”

Ruth said during an interview at their Bradenton home, “We’ve had to adjust to the role reversal recently,” with the support of Tidewell, hospice is not only taking care of Ruth but also Sam. “Because I’m six years younger than he is and because I’m a nurse, I always thought toward the end of life I would be taking care of him. Now he’s been taking care of me.”

Ruth and Sam weathered the ups and downs of marriage. Ruth was there for Sam as he coped with the loss of a son, his mother and his eldest sister. Sam supported Ruth’s passion for nursing and her desire for students to be successful. Ruth delayed her retirement plan even though Sam retired from the power company years before her. Sam learned how to cook so she would have a homemade meal after a long day of clinical education. “His French onion soup and stroganoff are outstanding,” Ruth said.

When life was challenging, Ruth said to herself, “I can make it because Sam loves me.”

It has been a marriage of equals. “He once said that he and I were two oxen yoked together at the neck. I said, ‘Oh, that’s so romantic. You’re so romantic,’” Ruth laughed. “What he meant was we’re pulling the load equally. … I have never been the little woman. I have never once felt I was judged differently by him. He has always treated me as his partner, in decision-making, in life, in everything else.”

Ruth raves about her RN Case Manager, Ryan, and how much Tidewell Hospice has helped her and Sam. When a walker wasn’t the right fit for Ruth, Ryan replaced it within hours. Sam has participated in anticipatory grief counseling. The Tidewell social worker, Rebecca, helped identify needs for both Ruth and Sam.

“I can’t say enough about how fast the response is when we say we need something. Tidewell has done well at giving us overnight response,” Sam said. Recently Ruth utilized the Tidewell hospice facility for symptom management and returned home a few days later.

Even though Ruth had extensive knowledge of hospice from her teaching days, she was initially reluctant to call Tidewell.

“I wasn’t ready to go into hospice because that meant I was giving up,” she said. “No, it doesn’t mean I’m giving up. What it means is I’m choosing quality over quantity. With hospice, I have the best of all the worlds.

“One of the things I was concerned about is being a burden on Sam. I am assured that I will never be a burden on Sam, that my hospice team will take care of me.”

Ruth is living and dying well now, though she sometimes searches for the words that once came to her so easily. Tidewell has provided a hospital bed in the living room so she can watch birds at the bird feeder and view the roses Sam planted for her.

“Hospice has given me permission to enjoy the quality of what I have left,” Ruth said. “I don’t have to worry about medications or equipment, or what am I going to do when I can’t get up and walk around. I don’t have to worry about that because hospice will take care of me. And I know that Sam won’t be alone. There will be a whole family of hospice people there with him.”

If your loved one could benefit from Tidewell Hospice care, call (941) 894-1777 or visit TidewellHospice.org.