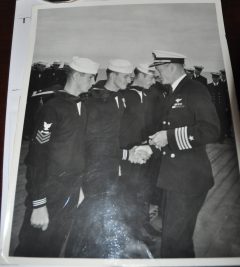 Russell Palmer set his path for service in his youth. He lived a Connecticut farm life, then joined the Navy and then went to fight at sea during World War II.

“I was in my second year of high school. I was tired of school. I was interested in travel. I joined the Navy a year before World War II. I was a torpedo man. My mother didn’t want me to join. She had to sign for me,” Palmer said.

Now 94 years old and in Suncoast Hospice care, Palmer sat in his living room and shared his past with Vietnam Marine Corps Veteran and Suncoast Hospice Volunteer Skip Cutting. As part of the Veterans Serving Veterans volunteer program, Cutting provides camaraderie, honor and support to our veteran patients and their families.

The two soon dove deeper into Palmer’s time in the war, swapping information back and forth about a deadly ship attack Palmer survived. On October 15, 1942, Japanese enemy aircraft carriers executed an airstrike that sunk the USS Meredith (DD-434). Palmer was one of the fewer than 100 men who lived and were rescued from the water after four days. 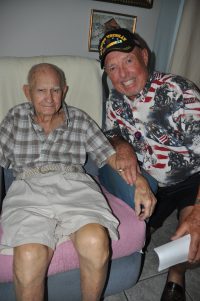 “You went through the Panama Canal. You were attacked by 38 Japanese airplanes and fought them off as long as you could. You were struck by torpedoes,” noted Cutting. 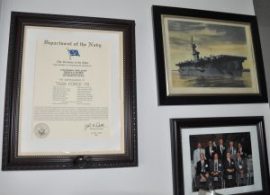 Palmer recalled, “There were two groups of destroyers. We had tankers with us and they filled us with fuel. The radar wasn’t any good at that time. We didn’t know they were above our heads. They were up in the clouds. They sunk us so fast. We were sunk in about five minutes.”

Afterwards, he went on to complete the remainder of his six years of service. He keeps a copy of a book written about that fateful day along with military photos displayed in his home.

Life Before and After the Military

Palmer is a native New Englander born in Braintree, MA. When he was a baby, he and his parents moved to Hyde Park in Boston. In grade school he moved with his mom to Connecticut.

“My father was working on the railroad. He was a heavy smoker. He died at a very young age at 55. My mother and father broke up because they weren’t getting along. I lived with my mother on a farm in Connecticut. Then I joined the Navy.”

After he got out of the military, he built a strong livelihood working as a master plumber and in real estate. He married and had two children, a daughter who lives nearby in Seminole, FL and a son who lives in the Carolinas. 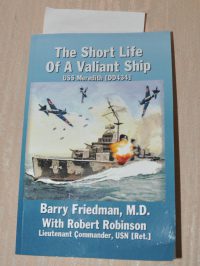 “I had my own business for a few years. I made a good living and I saved a lot of money. I bought and sold real estate. I retired young and my son took over the business.”

Several years after his wife died, he met and courted a new love whom he went “steady” with for many years. They enjoyed watching movies at home and going out to dinner together. She recently died.

Looking back, Palmer has led a long and fulfilling life. The military is one special sense of duty.

“I did what I had to do. I never regret going into the service, even after being sunk,” Palmer said.

Cutting stood and presented Palmer a special certificate and pin in recognition of his service. He thanked Palmer for the visit and offered to come back again sometime.

“It was an honor to be here with you today,” Cutting shared.

We’re always looking for veterans to support our veteran patients and their families. Go online to learn more about our volunteer opportunities or find an upcoming volunteer orientation.