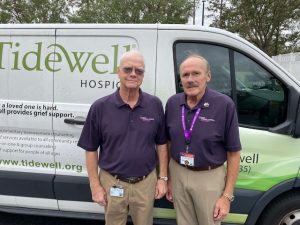 John Joly says there is a reason he and fellow volunteer Bill Rempe are popular when it comes time for Tidewell Hospice to honor military veterans.

“We’re frequently called to do pinnings because we never say no, and we’re usually reachable,” Joly said.

Lakewood Ranch residents Joly and Rempe are dedicated volunteers with Tidewell Honors Veterans, the program that provides specialized care and support and recognizes the contributions of military veterans. Tidewell Hospice is a member of Empath Health.

Why are veterans so important to Joly and Rempe? It’s simple.

“It’s why we’re here. It’s why we have the country we have. And we take it for granted,” Joly said.

The duo got involved with Tidewell Honors Veterans through the Knights of Columbus San Damiano Assembly #3192. The assembly honored Tidewell Vice President Irene Henderson, who helped created the Honors program and has since retired, at its 2019 Patriotic Ball. The next day, Joly signed up to volunteer. Rempe followed.

Since then, Joly and Rempe have recruited other veteran volunteers, a clown volunteer, a pet therapy volunteer and several complementary services volunteers for Tidewell. Their efforts earned their assembly a To Be a Patriot Supreme Award from the Knights of Columbus.

Joly and Rempe have performed more than 100 pinning ceremonies apiece. During the ceremonies, veterans receive a certificate of appreciation and a Tidewell Honors Veterans pin. The veterans are honored for a job well-done and a life well-lived.

“It’s rewarding. It gives you a lot of pride. It’s also an honor and a privilege,” said Joly, who served with the 1st Naval Infantry Division during the Vietnam War. “It’s akin to the Knights of Columbus. We’re called brothers. In the service, you’re a brother that would die for each other. It’s natural to get involved.”

Said Rempe, who served stateside in the U.S. Army from 1971-77, “We do it because it’s important for us to let them know by way of this ceremony that their service, and their family’s service, will not be forgotten.”

Rempe remembered his first pinning ceremony, during which the patient died just before he arrived. The family asked him to do the pinning anyway, and as he was performing the ceremony, a Tidewell nursing assistant sang the Star-Spangled Banner softly behind him.

“It was an event I’ll never forget,” he said. “That was my first event, and since I have had dozens that are just as moving and just as rewarding, not only for the family, but for Bill. It’s a big deal.”

The Tidewell Honors Veterans program is part of Empath Health’s long history of providing care and support for veterans. Empath Honors and Tidewell Honors are Five-Star Partners, the highest level possible, in the National Hospice and Palliative Care Organization’s We Honor Veterans Program. Veteran to Veteran volunteers offer camaraderie only fellow veterans can relate to, facilitators in the Veterans History Project collect veteran stories in partnership with the Library of Congress, and monthly informational and support options are available throughout served communities.